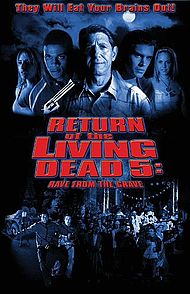 Multiple appearances of zombies are passed off by characters as realistic costumes.

The film features an extended zombie battle at the titular 'rave' with the party-goers one by one turning into brain-eating zombies.

The zombie infested rave is ultimately bombed by law enforcement officers, leaving only a few human survivors. The movie ends with Tarman, a recurring zombie in the series, hitchiking, but he is not picked up.

Retrieved from "https://zombie.fandom.com/wiki/The_Return_of_the_Living_Dead_V_(2005_Film)?oldid=48557"
Community content is available under CC-BY-SA unless otherwise noted.