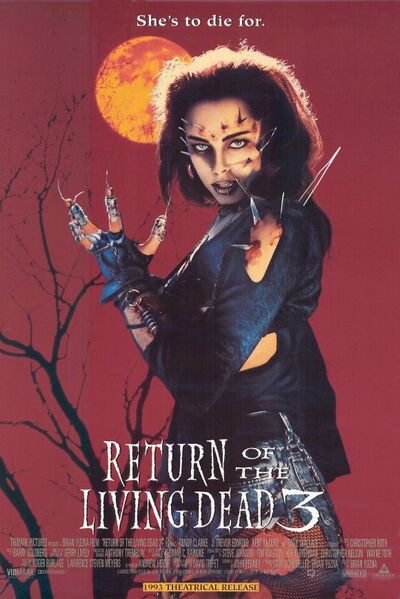 Return of the Living Dead 3 is an American horror film released in 1993. It was directed by Brian Yuzna and was written by John Penney. The film stars Melinda Clarke as Julie Walker, J. Trevor Edmond as Curt Reynolds, Kent McCord as Col. John Reynolds, and Basil Wallace as Riverman.

The corpse is exposed to 2-4-5 Trioxin gas. Trioxin, developed in the late 1960s and the inspiration for the movie Night of the Living Dead, re-animates the corpse into a zombie. The military's intention is to use zombies in warfare as expendable soldiers. However, once re-animated, the zombies are difficult to control. While this is fine in a chaotic battle, it makes them difficult to ship and store.

To solve this problem, Sinclair would like to attach the zombies to exoskeletons, which could be locked down when the zombie were not in battle. Reynolds, as the head of the project, takes a different approach. His scientists developed a method of "paretic infusion" to paralyze the zombie until it is needed. To do this, they fire a chemical bullet into the forehead of the zombie which creates a localized endothermic reaction that freezes the creature's brain.

At first, the paretic infusion test looks successful... but the effect wears off much quicker than they expect and Cadaver attacks Dr Hickox, by biting his fingers off and bashing his head against a wall till he was dead. Having been infected by Cadaver, Dr Hickox is re-animated, and starts biting one of the other technicians legs while the technician begs for mercy. Dr Hickox is paralyzed with bullets and everyone in the room is quarantined. The magnitude of this failure causes Reynolds to be re-assigned to Oklahoma City and Sinclair to be promoted to head of the project.

When Reynolds informs Curt that they'll be moving again -- something they've done a dozen times in Curt's life already -- Curt refuses. Angrily, he storms out of the house with Julie and rides off on his motorcycle. While speeding down the road, Julie grabs Curt's crotch, causing Curt to veer into the path of an oncoming truck. Curt swerves and slams into a guardrail. Julie flies off the bike, slams into a telephone pole, and is instantly killed when she breaks her neck.

Distraught, Curt brings Julie's body back to the military base. Using the keycard again, he sneaks her into G-17 and uses the Trioxin gas to re-animate her. Julie initially seems perfectly normal (most likely due to her extreme "freshness" as a corpse, having only been dead for less than an hour) , but soon starts exhibiting symptoms, such as pain (from rigor mortis and the general state of being dead, as mentioned in previous movies) and hunger pains that cannot be satiated by regular food. An attempt to do so in a convenience store accidentally leads to a confrontation with a Hispanic street gang, where the Chinese owner is shot and left for dead - and turns into a zombie as well. Julie bites and infects Mogo, one of the gang members. This leads to a subplot of the gang chasing Julie and Curt through the city, not realizing what is happening to their infected friend. Trying to hide from the gang in the sewers, they encounter a vagrant that calls himself Riverman, who takes them in and hides them. He gives Curt a coin, saying it is a representation of his philosophy of "if you meet someone, do them some good, then tell them to pass it on." In the meantime, the military has learned of Curt's break-in and Julie's exposure to the Trioxin. While Curt's father is extremely worried about his son's welfare, Lt. Col Sinclair couldn't care less. She is only interested in reclaiming a valuable test subject.

Back in the underground, Julie discovers that extreme pain seems to make the cravings to feed on humans go away for a while, which leads to a scene where she adorns herself in "S&M zombie" gear scavenged from the debris around Riverman's lair, complete with a large shard of glass driven through one hand, and a piece of leather, weighted down with a rock, pierced through the other. This actually comes in handy when the gang finally tracks Julie and Curt down. In a very messy confrontation with the gang, she uses her new decorations to stab, beat, and otherwise kill several of the members. Unfortunately, her body starts to become numb to the pain over time, and she winds up turning on Riverman, infecting and killing him. Julie's current state, coupled with the Santos re-animation, makes things seem very bleak. That is, until they are "rescued" by the military.

With the remaining gang members shot, Curt is arrested and taken back to the base, and Julie is impounded as military property by Sinclair. Curt manages to escape and rescue Julie, but in the process he winds up setting off a chain of events that free the remaining original Trioxin zombies from their containers. While trying to escape, Curt and Julie encounter none other than Riverman, who is now locked into one of Sinclairs's prototype exoskeletons. Sinclair soon finds out the exoskeletons aren't quite as effective as a means of restraint as she had hoped (which incidentally leads to her death). Riverman is about to kill Curt as well, until Curt displays the coin Riverman gave him earlier. This apparently brings to the surface enough humanity to cause Riverman to spare Curt and Julie.

By now the entire facility is on a countdown to incineration. Curt and Julie are nearing the exit when Curt is bitten by the final Trioxin zombie. Realizing that he is now infected, Curt decides at the last moment NOT to escape, despite his father's pleading. His father watches in horror as Curt and Julie deliberately climb inside the crematorium. The two lovers then share a final embrace as the flames surround them and the screen fades out.

Retrieved from "https://zombie.fandom.com/wiki/The_Return_of_the_Living_Dead_III_(1993_Film)?oldid=48551"
Community content is available under CC-BY-SA unless otherwise noted.