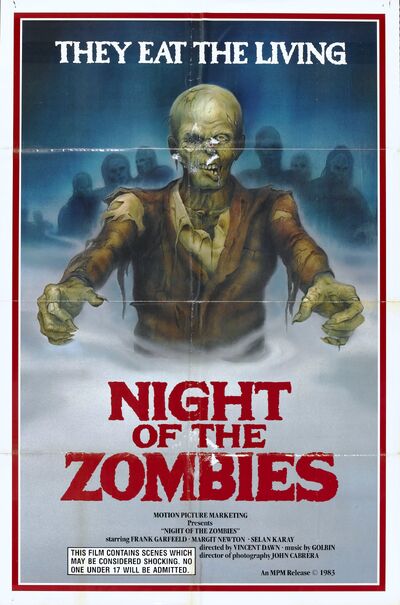 Hell Of The Living Dead is a 1980 [[Wikipedia:horror film|horror film]] directed by Bruno MatteiThe films is also known as "Virus" (which is the original Italian title of the film), as well as "Zombie 2", "Night Of The Zombies" and "Zombie Creeping Flesh". Made at the peak of the early-eighties zombie fever, the film plays like a gory mix of the usual zombie cliches.

The film opens at a top secret chemical research facility called Hope Center #1 where a chemical leak in one of the modules at the facility turns the entire staff into flesh-eating zombies. The movie then shifts to an unnamed European country with a four-man team of commandos led by Lt. Mike London (José Gras) being deployed to eliminate a group of terrorists who have taken hostages inside a large building. The unknown terrorists are demanding the closing down of all the Hope Centers, which both the government and the military deny the existence of, and the press, under orders of the local authorities, do not make any public announcement to the terrorists' demands or any mentioning of Hope Centers. After pumping tear gas into the building, Lt. London and his three commandos burst into the room where the terrorists are and kill them all. Once the mission is completed, the team is flown to Papua New Guinea due to communication being lost with Hope Center #1, presumed due to terrorist action. They soon meet journalist Lia Rousseau (Margit Evelyn Newton) and her cameraman, who are investigating a series of mysterious and violent attacks on the local native population. After encountering some of the natives, the group come under attack by hordes of flesh-eating zombies which attack the native village, killing and eating all the living people they come into contact with. Over the course of the movie, the four military men and two journalists travel through the New Guinea jungle in the commando's jeep, trying to survive while evading increasing numbers of flesh-eating zombies. Midway through the film, the group takes refuge in an abandoned plantation, only to come under attack from the zombie residents who kill and eat one of the commandos, forcing the surviving group to flee. Eventually, Rousseau and London's men battle their way to a beach where they take a raft and finally arrive at Hope Center #1, where they find all of the workers either dead or roaming the facility as zombies. Rousseau and London finally learn about the experimental chemical that was accidentally released which kills people and turns them into zombies. Rousseau learns from the papers left behind in the offices that the chemical, coded as 'Operation Sweet Death', had been intended to curb the Third World population by driving them into preying on each other. In the end, however, neither London's team nor the two journalists make it out alive as the zombies attack them from all directions, and they are all killed. The final scene has a group of zombies attacking a couple in a city park where it grimly implies that the contagion has now spread to the developed world.

Virus started life as a film treatment written in 1980 by José María Cunillés and was latter fleshed out into a rather large script by Claudio Fragasso and his wife Rossella Drudi. As the market was hungry for zombie films in the wake of Lucio Fulci's blockbuster Zombi 2, two studios specializing in low budget horror, Dara Films in Spain and Beatrice Films in Rome, pitched together to option the script.

The original script, set in Africa, would have been much too expensive for Dara/Beatrice to produce, with scenes involving ships full of dead bodies and a corpse mincing plant, so Bruno Mattei, well known for being able to work with scant finances, was brought on board to direct with the help of Claudio Fragasso. Filming took place in Barcelona over a four-week period where all the exteriors were shot before the production moved back to Rome to finishing filming at Studio Mafera. Shortly after this, Mattei realized that the footage shot in Spain was insufficient and partially unusable. Dara had decided not to rewrite the script before the production began and henceforth much of the footage shot was random in its nature; indeed much of the film's plot is incomprehensible.

In an attempt to "exotic" up the production and give the protagonists another set piece to duke it out with the zombies in, Mattei suggested that footage from the pseudo-mondo documentary La Vallée be incorporated into the film and sets built to mirror the village from the documentary so new scenes could be shot. This was readily agreed to by the nervous producers at Dara/Beatrice, who were anxious to get the production back on track. As Mattei was busying himself with the studio filming, Claudio Fragasso was given free rein to shoot some new special effects shots (mainly consisting of zombies getting shot in front of a dark backdrop and the famous hand in face ending) to gore up the film, again at the producer's request.

The "fog" style attempt to save the production continued with a new ending tagged on, and the addition of some of Goblin's famous music from Dawn of the Dead (this nearly landed the production in hot water as Goblin claimed that the producers did not have permission to use their score). With all the new additions to the film it now ran over 100 minutes and consequently some of the original footage was removed prior to release in November 1980. Dara also edited the film further prior to submitting in for UK release.

Hell of the Living Dead is one of the most "alternatively titled" films of all time:

Retrieved from "https://zombie.fandom.com/wiki/Hell_of_the_Living_Dead?oldid=36377"
Community content is available under CC-BY-SA unless otherwise noted.