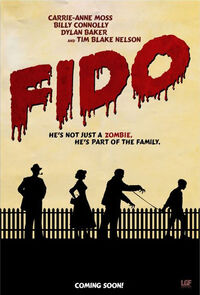 Fido is a Canadian zombie comedy film released in 2006. It was directed by Andrew Currie and written by Robert Chomiak, Andrew Currie, and Dennis Heaton from an original story by Dennis Heaton. It was produced by Lions Gate Films, Anagram Pictures, British Columbia Film Commission and Téléfilm Canada.

Fido is essentially a cross between several 'boy and his dog' movies, Night of the Living Dead and Pleasantville, only the dog is a zombie.

"Welcome to Willard, a small town lost in the idyllic world of the 50's, where the sun shines every day, everyone knows their neighboor, and rotting zombies deliver the mail. Years ago, the Earth passed through a cloud of space dust, causing the dead to rise with a craving for human flesh. A war began, pitting the living against the dead. In the ensuing revolution, a corporation was born: ZomCon, who defeated the legions of undead, and domesticated the zombies, making them our industrial workers, our domestic servants- a productive part of society. ZomCon would like the people of Willard to believe they have everything under control...but do they? Timmy Robinson doesn't think so. At eleven, Timmy already knows the world is phoney baloney- Mom and Dad just won't admit it. Now ZomCon's head of security has moved in across the street and Timmy's Mom refuses to be the only housewife on the street who doesn't have a zombie of her own. When she brings a zombie servant home, Timmy discovers a new best friend, and names him Fido. And even though Dad has a bad case of zombie phobia, Timmy is determined to keep Fido, even if he does eat the odd person... Sometimes, it takes a dead man to teach us all what it means to be alive."

The film is rated 14A by the Ontario Film Review Board for violence, crude content and gory scenes and rated PG-13 by the MPAA But then rerated R for sequences of zombie violence and gore, and comic horror situations.

Rotten Tomatoes critics gave the film a "Fresh" rating. Robert Abele of the Los Angeles Times, John Anderson of Newsday, Manohla Dargis of the New York Times, Kirk Honeycutt of the Hollywood Reporter, Geoff Pevere of the Toronto Star, and Elizabeth Weitzman of the New York Daily News turned in positive reviews. However, Richard Roeper gave it a resounding 'two thumbs down.' The Mail Order Zombie podcast reviewed Fido on Episode 5, and awarded the movie 2 Headshots out of 5.

Billy Connolly- Fido. Peter Stormare was originally cast for the role of Fido, but upon being cast in Prison Break opted out of the film a week before principal photography was to begin.

Retrieved from "https://zombie.fandom.com/wiki/Fido?oldid=32142"
Community content is available under CC-BY-SA unless otherwise noted.